We wish to inform you that we have identified and corrected an error in Gross domestic product: June 2021 quarter. There is no impact on headline quarterly GDP (production measure of GDP), which remains at an increase of 2.8 percent for the June 2021 quarter.

This error primarily affects estimates for the latest quarter (June 2021 quarter) and impacts on the total and some components of Expenditure on GDP. It was caused by some data being missed in the compilation of central government expenditure. This missing data relates to measuring intermediate consumption by government, and also spending related to Managed Isolation and Quarantine (MIQ). In light of this correction, we have also reviewed our estimates of the change in inventories and have revised this downwards.

Variables that have changed as a result of making this correction are as follows:

For further information about the correction please see Corrections made to Expenditure on gross domestic product.

Stats NZ is transparent and open about errors and corrects these as soon as possible. We will review our current processes to help prevent similar errors happening in the future.

We regret this error and apologise for any inconvenience caused.

The latest growth is the lowest quarterly growth rate since December 2013.

Growth was mixed, with 11 of the 16 industries recording higher production in the September 2018 quarter.

“Construction activity fell as repair work winds down on roads damaged in the Kaikōura earthquake. However, residential and non-residential construction continued to grow steadily.

“The largest contribution to the downturn in goods-producing industries was manufacturing, with food manufacturing down significantly,” Mrs Hollows said.

Growth in the service industries was widespread but moderate, with no industries having strong movements.

Mining rose 12 percent, partly recovering from the sharp fall in the June quarter. Oil, gas, and coal production all increased. The Pohokura gas field outage contributed to the large fall in June. The field was still operating at limited capacity, which constrained the bounce back in mining.

GDP per capita was flat in the September 2018 quarter, following an increase of 0.5 percent in the June 2018 quarter.

Annual GDP growth for the year ended September 2018 was 3.0 percent.

The size of the economy in current prices was $291 billion, for the September 2018 year.

Text alternative for Size of the economy (GDP), for the September 2018 year

Total size of the economy is $290 billion.

The Government Statistician authorises all statistics and data we publish.

Gross domestic product (GDP) provides a snapshot of the performance of the economy. GDP is New Zealand’s official measure of economic growth.

Economic activity, as measured by gross domestic product (GDP), was up 1.0 percent in the June 2018 quarter. This rise follows a 0.5 percent increase in the March 2018 quarter.

Growth across 15 of the 16 industries contributed to the largest quarter-on-quarter increase in two years. A 1.0 percent increase in the service industries was the biggest contributor to growth this quarter. The goods-producing industries were up 0.9 percent following a flat March 2018 quarter. The primary industries grew 0.2 percent, with strong growth in agriculture, forestry, and fishing offset by a significant fall in mining.

All service industries up

Agriculture, forestry, and fishing up, but mining down

Growth in agriculture, forestry, and fishing was further supported by increases in sheep and beef cattle farming, reflected in higher meat exports for the quarter. Meat prices rose 3.6 percent to reach historically high levels. Horticulture and fruit growing, and forestry were also up in the quarter.

The strong growth in agriculture, forestry, and fishing was offset by a 20 percent drop in mining in the June 2018 quarter. The fall – the largest for the industry since 1989 – resulted from an unplanned outage at New Zealand’s largest natural gas field, the Pohokura field, after a leaking pipeline was discovered in March.

A fall in petroleum and chemical manufacturing partly reflects downstream effects of the Pohokura outage, as reduced gas supply led to Methanex halting their operations. This is in conjunction with an expected drop due to the planned shutdown of the Marsden Point refinery for maintenance.

Goods-producing industries rose 0.9 percent in the June 2018 quarter as electricity and construction each rebounded from falls in the March 2018 quarter. Electricity generation provided the biggest contribution, with above-average hydro lake levels and greater household consumption powering a 3.7 percent increase.

Offsetting these increases was a 1.3 percent fall in plant, machinery and equipment investment. This fall follows six consecutive quarters of increase, with growth for the year ended June 2018 up 13 percent.

New Zealand’s ability to buy goods and services from its income improved in the June 2018 quarter. Real gross national disposable income (RGNDI), which measures the real purchasing power of the country’s disposable income, was up 0.8 percent in the quarter.

Annually, RGNDI was up 3.1 percent.

RGNDI measures the volumes of goods and services that New Zealand residents have command over while GDP measures economic activity. RGNDI is also affected by changes in the terms of trade, as well as the country’s net investment income and net transfer flows with the rest of the world.

GDP growth of 1.0 percent in the June 2018 quarter, coupled with a 0.6 percent rise in the terms of trade, outweighed a slightly larger net flow of income overseas to produce a 0.8 percent rise in RGNDI. The larger net flow of income overseas was a result of the worsening net transfers flow more than offsetting a small improvement in the net investment income flow.

The terms of trade is the ratio of the price of exports to the price of imports. An increase in the terms of trade occurs when export prices rise by more than import prices and result in fewer exports being needed to pay for a given volume of imports. This means residents can purchase a larger volume of goods and services from the incomes generated from a given level of domestic production.

See OECD.Stat for GDP data covering other countries. Care should be taken when comparing New Zealand’s GDP figures with those of other countries, as the methodology used varies internationally.

We incorporated several revisions in this release. Revisions reflect new or improved data that affect historical results, or changes to the underlying measure. In both cases we aim to better represent the real-life situation of a changing society, economy, and environment.

Growth was broad-based, with 15 of 16 industries recording higher production. Mining was the only industry to decline, reflecting one-off factors.

The largest contribution to growth came from agriculture, up 4.2 percent.

Growth of 1.0 percent in the service industries was broad-based, with all industries recording a lift.

“The real strength of services this quarter lay in a consistent performance across a range of industries,” Mrs Hollows explained.

Within primary industries, agriculture’s strong performance was supported by growth in forestry. A 20 percent fall in mining – its largest fall in 29 years – provided a strong offset.

“Quarterly growth in agriculture was the strongest since September 2014, with the dairy season ending well after earlier weather disruptions,” Mrs Hollows said. “An unplanned shutdown stalled gas production, which led to the fall in mining as well as some offset to manufacturing activity.”

Growth in electricity generation was the largest in nine years, with wet and cold weather likely to have influenced both production and demand.

GDP per capita was up 0.5 percent in the June 2018 quarter, following a flat quarter in March.

The size of the economy in current prices was $289 billion.

Video summary of gross domestic product for the June 2018 quarter

Read the transcript of this video (PDF, 379 KB)

Read the transcript of this video (Word, 72 KB)

Diagram has a column graph, pie chart, and bar chart showing growth, share of the economy, and contribution to growth in the June 2018 quarter of the primary, goods-producing, and services industries.

Pie chart shows that services industries make up about two-thirds of GDP, goods-producing about one-fifth and primary about one-twentieth.

During 2009, our current account deficit dropped from a record peak of 7.8 percent of GDP to 2.2 percent; it has hovered between 2 percent and 4 percent since.

Although the dollar value of the current account deficit has now risen to a similar level as during the global financial crisis, the economy has grown even more. As a result, our net spend with the rest of the world has shrunk relative to the size of New Zealand’s economy. The latest deficit is equal to 3.3 percent of GDP, larger than for year ended June 2017 (2.6 percent).

Net liability position narrows as a percentage of GDP

The net liability position is how much New Zealand owes to the rest of the world.

“If the rest of the world called in all the debt New Zealand owes overseas today, it would equate to over half of all expenditure in New Zealand in one year,” international statistics senior manager Peter Dolan said.

“While still considered high, this quarter’s position is significantly lower than our record level in 2009. It’s regularly been reaching record lows in recent quarters.”

“New Zealanders have been investing overseas in the likes of shares and have benefited from favourable global sharemarkets,” Mr Dolan said.

Over the same timeframe overseas investors have seen the value of their portfolio investments in New Zealand rise $16 billion, due to favourable market price changes, and have invested an additional $88 billion into New Zealand, providing an inflow of funds.

In total, at 30 June 2018 New Zealanders had $146 billion of portfolio investments overseas, but overseas investors had $207 billion in New Zealand.

Diagram has two column graphs showing inward and outward flows of New Zealand investment between the June 2009 and June 2018 quarters.

Agriculture recovered in the March 2018 quarter, up 0.4 percent, following a 2.8 percent fall last quarter. A rebound in milk production contributed the most to the rise, largely due to improved weather conditions, after hot, dry weather in the December 2017 quarter.

Construction cooled off, down 1.0 percent in the quarter but still up 1.4 percent for the year.

“Household spending on services was held back by reduced spending on second-hand vehicles, petrol, and clothing,” Mr Dunnet said. “The discovery of stink bugs in car shipments during the quarter has reduced the volume of cars available for sale.”

Growth in business investment, particularly in plant, machinery, and equipment, was supported by an increase in the import of capital goods. Exports fell across a wide range of goods, while export services were buoyed by tourism.

GDP per capita was flat this quarter, following a 0.1 percent increase in the December 2017 quarter.

Annual GDP growth for the year ended March 2018 was 2.7 percent.

The size of the economy in current prices was $286 billion.

The economy, as measured by gross domestic product (GDP), grew 0.6 percent in the December 2017 quarter, Stats NZ said today. Growth was driven by increases in the service industries but was tempered by falls in the primary sector.

Hot, dry weather appeared to have a negative impact this quarter on agriculture production, which fell 2.7 percent. Falling milk production was reflected in lower dairy manufacturing and dairy exports. In contrast, meat manufacturing was up, keeping pace with export demand for meat products.

Expenditure on GDP rose, underpinned by household spending and investment. Household spending was up 1.2 percent, influenced by people eating out more and spending more on groceries and alcohol. This was reflected in the retail trade and accommodation industry, with activity in food and beverage services and supermarkets increasing.

“Imports of capital goods such as aircrafts, factory equipment, and ICT increased considerably this quarter,” Mr Dunnet said. “This was reflected in a 2.1 percent rise in investment of fixed assets.”

GDP per capita increased 0.1 percent this quarter, following a 0.2 percent increase in the September 2017 quarter.

Annual GDP growth for the year ended December 2017 was 2.9 percent. The size of the economy in current prices was $283 billion. 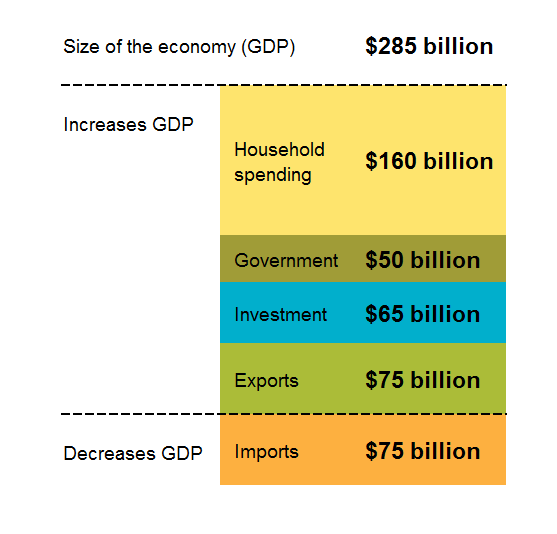 Read the transcript of this video (Word, 67 KB)

Read the transcript of this video (PDF, 246 KB)